I just wanted to share a few pictures of my time at the Sesame Puppeteer Workshop.PHOTO CREDIT: ZACH HYMAN     I’ve been practicing my puppetry skills since the workshop, and I’m planning on releasing a few fun videos this month.  So stay tuned! 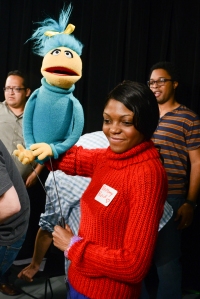 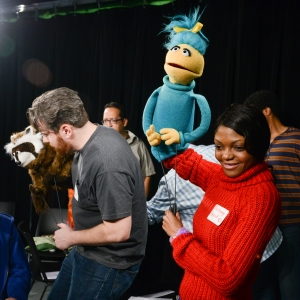 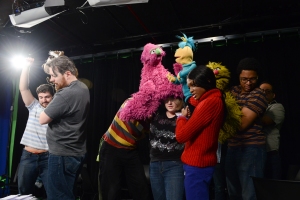 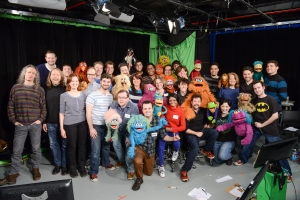 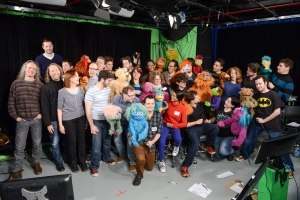 MEGA THANKS to Matt Vogel, Martin P. Robinson, Peter Linz, The Sesame Workshop, and these AMAZING puppeteers from around the country, for making this a treasured and unforgettable experience!  Also, MEGA THANKS to Zach Hyman for preserving these precious memories for us!-Brittany L. Reid

The Herald Gazette: “Reid Knows the Way to Sesame Street”

(As published in the Barnesville newspaper, The Herald Gazette)
Date of Publication: Tuesday, March 4, 2014 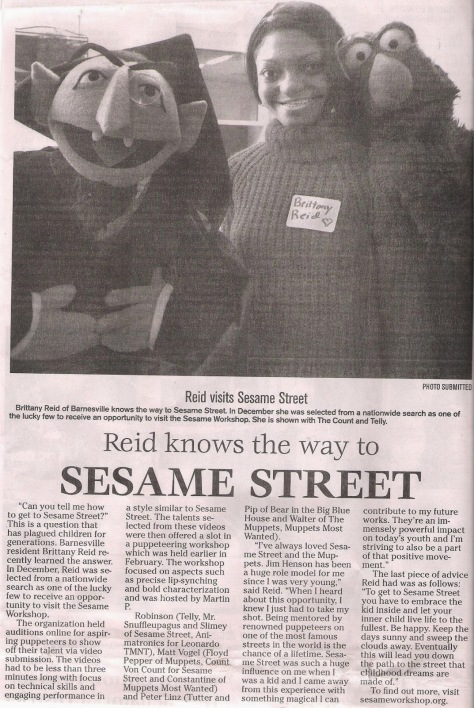 Above is a printed copy of an article that was published in my local newspaper, highlighting my trip to The Sesame Workshop.

*For a larger view, click “Reid Knows the Way to Sesame Street,” or click on the picture.  When a new window opens, click the picture again to enlarge it.

My Visit to the Sesame Workshop 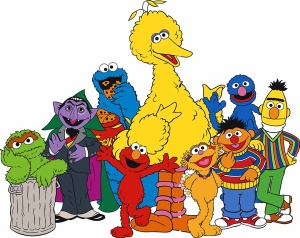 Tremors shivered up and down my spine and butterflies fluttered in my stomach as I clutched the phone tightly in my hand. It rang and then I heard my mother’s voice on the other end.
“Hello?”
“Hi, where are you?”
“Driving with your Memama.  We’re about to do some Christmas shopping.”
“Okay, well you might want to pull over or something.”
“Why?”
“I’ve got some big news.  Do you have me on speaker?  Put me on speaker!”
“Hold on. ……Okay, you’re on speaker,” my mom says.  Then, after my grandmother gives me her hello, I take a breath,
“Hi! Well, it looks like I’m heading to Sesame Street!”
—

That’s how I broke the news to my family after I received an e-mail stating that my submission for the 2014 Sesame Puppeteer Workshop had been accepted back in December. Immediately there were exclamations of joy from my mother and grandmother, and we soon shared the news with other members of the family. 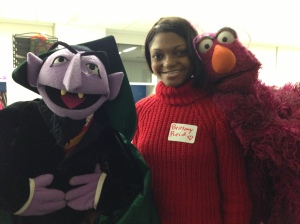 The Count, Telly, and Me!

I’ve loved the Muppets ever since I was a kid. I mean, who hasn’t? Their characters are hilarious and timeless, heartfelt, and imaginatively realistic. Since their debut, they’ve practically been a part of everyone’s family, for every generation. But my love of puppetry extended beyond the Muppets. As a child, I had puppets of Charlie Horse, Lamb Chop, and Hush Puppy whom I often lifted up to the TV as I tried to mimic the performances I saw on “Lamb Chop’s Play Along.” I even took an interest in ventriloquism when I was about 9, and did shows for my local church and local school.

My love only grew as I became intricately interested in not just the performances, but the foundations of the stories and lessons that the puppets conveyed to their audiences.  By the time I was 11, I knew that I wanted to be part of a movement that had a great, positive impact on today’s generation. I knew I wanted that impact to be educational and entertaining.

Before long, I had written and illustrated my first children’s book, Quack-a-Doodle-Doo: Do it Like Dave.  After its success, I immediately began formulating a plan to incorporate my puppetry into my hobby of writing. I had done a few on-camera puppetry performances already. But I thought,

“Who better to help me hone my educationally-entertaining puppetry skills than the masters at the Sesame Workshop, a corporation who has breathed life into the edu-tainment industry since my parents were kids?”

With that in mind, when I heard about the open-call for puppeteers to send in their videos to the Sesame Workshop, I knew I had to take my shot. It was a once-in-a-lifetime opportunity, and there was a one-in-a-million chance that I’d get in. But at least if I entered, I’d have a chance.

The video below is the one that I sent in for my submission:

As I shot the video, I recorded my part first. Then, I recorded my Muppet’s part. When I went in to edit, I merged the two scenes together, utilizing skills I’d learn from the Video Production courses I’d taken at the University of West Georgia.

Needless to say, when I informed my family that my application had been accepted, they were thrilled and gave me their full support…(and when I say full support, I mean FULL). Before I knew it, I had two aunts and a grandmother exclaiming that they, “wanted to go to New York too!” I practically had an entourage geared up to travel with me to The Big Apple.

My family and I decided to travel by car. It was a long trip, but we entertained ourselves with several movies we had brought along for the ride. By the time we reached Maryland, we realized that a pretty heavy snow storm would be coming along our path. So we decided to bunk at an Inn for the night. We woke up early the next morning, and pulled out around 9 AM to finish up the rest of the drive. We ended up reaching NYC around noon, giving us plenty of time to check in to our hotel. I then made sure I had my materials ready before heading on over to the workshop, which began early that afternoon.

Walking into the workshop, I was surrounded by pops of color and the kid inside me was giddy with excitement! As I turned the corner into the meeting room, I met some of my fellow puppeteers. Before long more people began to trickle in. We all signed in, put on our name tags, and all chatted for a while as we eagerly waited for our mentors.

There was an air of cheeriness and positivity surrounding all three of them: Martin P. Robinson, Peter Linz, and Matt Vogel.

Everyone was beaming ear to ear as a bubbling wave of eagerness washed over the room. We all went around and introduced ourselves. Then, after we were given a rundown of what the workshop would entail, we were split up into our groups for the day.

Overall, the workshop focused on the basics such as eye focus and bold characterization. We did several exercises to help enhance our individual strengths and techniques throughout the workshop. There was also a great deal of versatility, both in terms of our groups and the puppets that we worked with. In the end, it all culminated into several fun skits that we did to gauge how much we had learned over the course of the workshop.

On the last day, we all make sure that we gathered each other’s contact information. My family ended up leaving NYC at about 4 AM after the last day, and we made it back home by that night.

I took away a lot; but one of the greatest aspects of this experience was the fact that I got to meet a lot of fabulous puppeteers, whom I hope to work with again at some point in the future.

I wouldn’t trade my experience at the Sesame Workshop for anything. I feel like a part of me is still in NYC; it all ended way too soon.

But it will definitely be marked as one of the best experiences of my life! 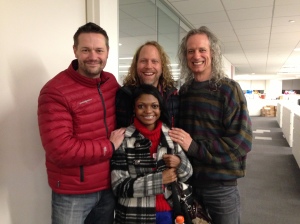 The everyday good and bad weather.

Come and learn how to draw amazing looking anime and manga drawings.

A Taste Of Our City